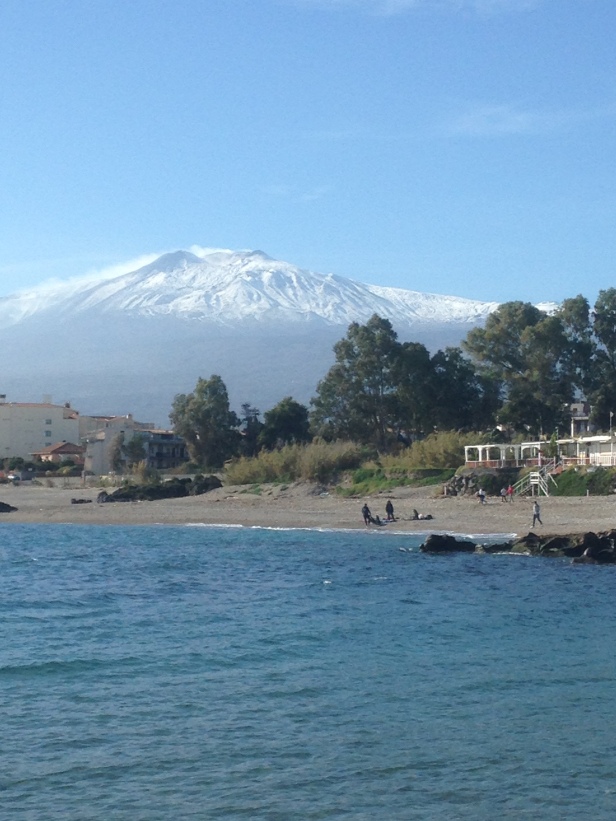 Tomorrow we get our hire car. After being here for four weeks and only limited to travel by foot, bus or train. We thought it was about time we hired a car. Paolo is getting it for us tomorrow, So we will be set for a busy four days. Mt Etna is high on the list and we are hoping for a clear day on Tuesday as we circumnavigate her. It’s about 185km to get around her so we are hoping for some stunning views. Etna is still one of those beautiful things we wake up to. Shes been erupting every night and the lava flow is now clear down from one of her craters. Last night we heard a boom about 6pm. We thought this was fireworks or gunfire, both common around here. But were told it was Etna her self putting on a show. We are a bit far away to get good photos at night, so we are hoping as we go around and get closer we can get some good shots. Wednesday and Thursday are flexible with going to the inland towns of Enna, & Piazza Armerina, said to have the best roman mosaics in existence. Caltagirone and its ceramics as well as its staircase Santa Maria del Monte. And if time permits Necropoli di Pantalica with its 4000 prehistoric and bronze age tombs. The other day visiting Calascibetta, Centuripe and Adrano. Leaving friday for north of Etna and the lava gorges (Gole di Alcantara) and hilltop town of Castelmola. All going to plan its going to be a bit of travel covering a lot of the central/ north-eastern side of Sicily. Saturday here was a national holiday, which can only mean one thing. If an Italian owns a motorhome, they are coming to a town near you. Used to our space, awning out and quiet during the day. The holiday named the “Immaculate Conception” on the 8th of December welcomed about 20 Italian campers here. All the other sostas and car parks also full. Families, barbecuing and nearly 12 dogs on our site leads to one big party. Watching campers squeezing into spots, parked in front and in the end, the driveway. Everyone friendly and welcoming. Our neighbour today, chatting away to me in Sicilian, not sure if he knew I didn’t understand everything he said. Shaking my hand goodbye and wishing us well. Calling his wife over we go through the ritual of three kisses or opposite cheeks. Such a nice hello or goodbye, even if you have never met them before.  I called Jason over to introduce him, mi marito (my husband), again shaking of the hands, smiles and nice words. Whilst Paolo was away on his cruise Giovanni and Marirosa looked after the place. Both back this weekend, Marirosa greets me like a long-lost friend, kisses and how are you? The Sicilian people are some of the nicest people you will ever meet. The bread guy now seems to be giving me my bread cheaper, either we are good friends or he thinks she buys from me everyday, I’ll make it cheaper. Xmas (Natale) is not far away and markets are full of Xmas stock. Lights are up and its hard to believe we were in Portugal this time last year. Pandoro, a sweet bread is popular around christmas and the shops are full of every type. One is currently taking up a whole shelf in our fridge. Last years portuguese xmas cake still a favourite memory. Before we know it a new year will be dawning and new adventures begin.