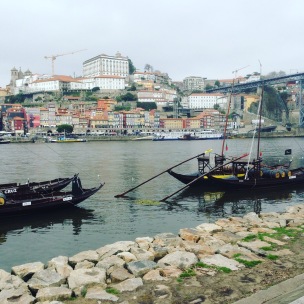 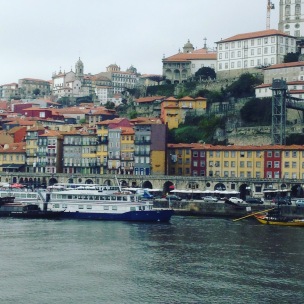 Porto is one of those cities you could just sit and people watch. Sat on the south side of the Douro in the suburb of Vila Nova de Gaia. To our left is the bridge Ponte de Infante with the worlds longest reinforced concrete arch and further down on the right the famous Gustave Eiffel’s iron railway bridge. We walked to Eiffels iron bridge,  its double-decker bridge with rail on the top and vehicles underneath, is a sight to be seen. The walk from where we are parked is just over an hour return. Without crossing over to the historic north side you pass the port cellars or caves (warehouses) famous for their Port wine. The numerous wooden boats and ferries line the edges of the river. And the cafes and bars make it the most tourist looking place according to Jason, I’m not so convinced. The world UNESCO Ribiera (waterfront) coloured buildings beam from the other side of the river and a cable car rises up to the hill above Eiffels bridge. In the distance you can see numerous churches dotting out of the mass of buildings up in the north, with a few cranes adorning the skyline. A huge archway, appears into the side of a building, blink and you will miss it. At night its stunning sitting and watching the lights beaming back over the water. Pretty Porto, you can tell it was an ancient trading route, now with a modern twist of buildings.  Hoping to venture out tomorrow but rain is forecast , so we might move on the warmer pastures. The Portuguese are friendly and mostly speak good english. We recently stayed 3 nights in Vila Cha to see out the wild windy storm, every morning Jason went down to see the fisherman for fresh fish and crayfish, but the swells were so big, I don’t think the boats could go out. So alas no fresh seafood this week. Tripe is the speciality in Porto so don’t think we will be sampling that. Maybe some Port though, I’m loving the cheap alcohol wine for €1-2 a litre and Jason bought vodka for €5 a bottle today. With all this red wine, my arteries will be clean as a whistle.

4 thoughts on “Porto….. watching the world go by”