This is our 4th night at Natura Camping in northern Hungary. Laszlo the host is so nice, he delivers free bread to everyone in the morning and his goulash made from scratch on friday night was delicious. Sitting with 20+ mainly dutch, german and belgium couples we all enjoyed the meal with beer and wine. Parked in a field in the four nights we have been here a steady flow of motorhomes, caravans and cyclists come every night. Laszlo welcoming everyone. I think he was afraid of the english speaking, but now we are great friends and he comes over and talks to me quite often. The fields here are full of the most beautiful insect life. Giant butterflies and moths in colours of orange, white and blue. Wasps in a blue pattern and the biggest bees we have ever seen. Something out of Jurassic park would sum them up, they are the size of your thumb. We walked into the little town a couple of kilometres down the road on the second day. Per capita nearly every house had a least one dog, and they all set one another off as we went past. It’s the first time I was on edge and couldn’t wait to get out of there. One dog terrified both of us, as it was huge and if it had got out we worried how we would protect all of us. It was angry . Talking of dogs my poor fur baby. Poor George hurt his dew claw about ten days ago and we have been trying to treat with cream and silver spray, but to be honest I thought the nail needed to come off. It was inflamed and he kept licking it, so it was obviously bugging him.  With a translation through Bill ( a dutch guy, Laszlos translator for english) I asked Laszlo if he could call the vet for saturday morning. He called and told us how to get there. Arriving outside I took in George and the lovely receptionist spoke enough English to understand and translate to the vet. They took one look and said we have to put him to sleep to take it off. I was fine with this, doing surgery myself nothing really fazes me too much. The thought of it had Jason cringing. Ten minutes later he was sedated, nail off and injection of two-week antibiotics. Bright red coban bandages, I also have blue and orange to last two weeks. George woke up and had everyone laughing as the first thing he did was lick everything on the table. If you have met George he will lick everything and try to eat anything. The vet and receptionist gushing we carried him out. Laszlo had arrived whilst we were seeing the vet, asking he ok, about George. What a sweet guy, he had driven the 10km just to see we made it ok. The queue out the door, i went down the road to get out the 23,610 HUF ( €70) out of the ATM. As in many places in Hungary they only take cash, no cards.

George is a lot better today and his cheeky usual self. I have to dress it daily and the coban stops him from licking the wound. He’s currently asleep under my feet and Zoey is lapping up the breeze in the door it’s so humid. A great day to chill before Slovakia tomorrow and Bratislava. 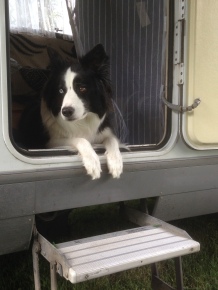