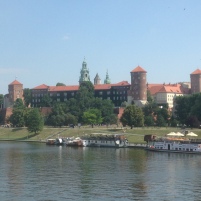 Poland has surprised us so far and we are currently in the city of Krakow. Tuesday we climbed through the Tatra mountains and over the border into Poland. The scenery that of lush green hillsides and ski field after ski field.  New housing and nice cars everywhere, in the south where we have driven so far. The roads are some of the nicest we have been on in Europe and fuel is about a £1 a litre. We were in desperate need of a laundromat, bank and a food shop. We found a bank as we travelled down the road and I went to the ATM and put in my card. The minimum amount was 1000 zlotys and it declined. I started freaking out, had we been robbed, why was my card declining. I check my account i only have 700 zloty (£150 approx). I go back to the machine and choose other amount…. you can get out as little as 10 zloty by choosing this option. Not like every other country where they give you a small amount ranging up, they start at 1000 zloty (£202). Next stop a supermarket…. cheap as chips, as they say. Tuesday night we wildcamped next to a river and dam. Alongside a british and german couple. Wednesday we set early towards Krakow and a laundry. 10km from our camperstop and in a new mall, a laundromat. Two massive bags and €9 later for washing and drying, bargain. The camperstop at a motor home dealership and €6.95 a night plus power and water. The bus to Krakow 15 minutes away, stops outside and you can buy tickets on the bus. Dogs allowed on with muzzles. Today we caught the bus into Krakow, the buses are crowded and you have to be fast to get on. The poor dogs, pushed about under people’s feet, trying to avoid the prams. Trying to by a ticket out of the machine, then validate them is quite an experience, in the 33 degree heat. Arriving in the centre we walked along the river, past Wawel castle, into the old town and main square. Seeing a free walking tour, we tagged on. Horse and carriages lined the square and we headed of to St Marys Church for the trumpeters chorus. Every hour on the hour a trumpeter performs. He starts in the direction of the castle and then continues to repeat the chorus out of 3 other windows in the direction of various points around the city. As he reached the window up above us in the tower, he started to play and George started howling back. It was the cutest thing I happened to capture. The sound of him howling as I was videoing the window. The tour was two hours and took us around the old town. Tomorrow we hope to do the Jewish quarter and Schindler’s Factory as the temperature is set to drop by nearly half to 18 degrees. We think we could spend a bit of time here as we want to go in a bit of a circle heading east, then north possibly then into Lithuania, back along the north coast of Poland, then down the west side and into the Czech Republic.