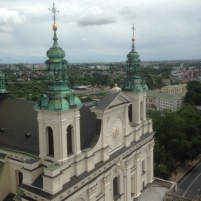 We spent three days on the outskirts of Krakow. Travelling in on the bus to do a couple of free walking tours. The second one we did was great, the Jewish quarter and Schindler’s factory. Our local guide was a great guy full of enthusiasm and knowledge. The tour was fab and we learnt a lot. At the end Jason went into Schindlers factory, he said it was good but our guide had told us most of it. Yesterday we travelled for nearly 3 hours to literally the middle of no where. Parked by a lake and only bothered by the odd stray dog it was a free night. Poland is full of straight roads, near perfect I might add, except for the odd bumpy road. I’ve said before that every country has something you see a lot of. Poland it is car washes, the high jet ones, literally every town has one or two. The most beautiful thing so far are the churches. In Poland every church is different. What I mean by this is the styles, I don’t think i have seen two alike. Some have many roofs, some have odd-shaped roofs, some tall, some wide. It’s so very different from Spain where they all follow a general style. If you have driven in Europe, you will know what i mean by a village followed by a stretch of open road. You increase your speed limit then you reach another village and decrease the speed. Not in Poland, its one village after another village. This means the speed limit is pretty much a permanent 30-50km an hour. Hence today taking near 3 hours to get to Lublin.  The scenery though was lush and you cant complain as you pass fields of wheat,  & orchards of apples and pears. Lublin is a must visit place, the castle is grand up on the hill and the walk over the cobbles into the old town, worth the view. Today was an antiques market that lined the streets and squares. A violinist and accordion player filling the streets with music. The buildings colourful and I climbed to the top of the Trinitarian tower for the views over the city. Lublin had a huge history and was the first capital of Poland after the first world war. It’s also here where the strikes of 1980 began leading to the country’s post war independence. Not far from here the Majdanek concentration camp, now a museum. Its said that 8,000 Jews were murdered there and the majority of Lublin Jews about 26,000 were deported to Belzec and died in the gas chambers. The Germans created a ghetto here in Lublin and it was eliminated in 1942. For such a beautiful city its history is heartbreaking.