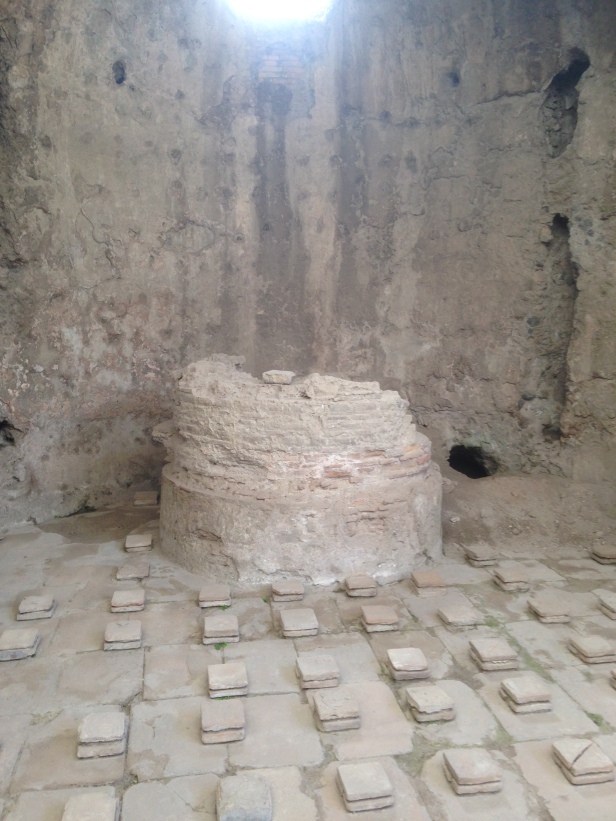 Its been a hectic week of ancient sightseeing. Starting the week in Ercolano, and then the climb up Mount Vesuvio. Both definitely worth a visit. Tuesday we travelled onto Pompeii. The roads, around Naples region are up there with the worst so far. We used the toll roads to avoid the craziness of cobbles and italian parking. Pompeii we parked 100 metres from the entrance at Spartacus camping. Not cheap at €23 a night with ACSI, it was the location that was the best. In desperate need of washing, we were down to the last items of clothing. I set off in search of a laundromat. A 4km round trip, I found it and decided that the next day, that’s how i would start the day. Getting up early i walked past the ruins of Pompeii and off to the laundromat, two huge bags full, it was my weight training for the day. The laundromat a mixture of self-serve and serviced. The poor lady had about 30 people turn up with their quilts all wanting them done that day. Her translation, a little bit of rain and they are all cold. in typical Italian style they all wanted it done then. Two hours later, i was walking back past the beautiful church and piazza. We decided to head on into Pompeii with the dogs. Not an easy question to get answered, can you take in dogs. Some say piccolo (small), some say ask the guard, some say muzzle and lead and some say no. We had to ask the guard, he wasnt there, so in we went. Stray dogs and cats wander the ruins, so maybe this is why it is such a grey area. Pompeii is amazing and we liked it more than Ercolano, its massive and some of the frescoes are stunning. Everyone wants to see the plaster casts of the bodies that where frozen in the time of the eruption. So we searched only checking on the map later on. We found three lots and funny enough had walked past them several times. One so prominent,  it stands out, someone crouching , as if they were hiding. Simply going to every building is a task, so you miss some out. The roman baths were stunning and the whorehouse was decorated with pictures of people in certain poses. The amphitheatre is the oldest surviving roman ampitheatre. So we can tick that off the bucket list. The vases and pottery still intact and on display. The cobble streets like boulders, you can imagine horse and cart back in the day. The entry in here €15 each, and so worth it, you could easily spend a day here walking all the streets. We left yesterday and headed of to Salerno. Out on the coast it was nice to walk the promenade along the beach. Italians out in mass enjoying the glorious sunshine. We walked through the town, the main streest covered in huge tinsel arches and lemons hanging from above. We headed to the duomo. Wow the outside courtyard was stunning with carved crypt/ coffins. Inside the gold leafed paintings in the domes on the roof, so beautiful. Staying just out of Salerno we headed back for the night. We were tossing up whether to go to Paestum today which we did. The greek ruins, were so worth the trip. The roads amazing and the free autostrada, making us feel like we were in another Italy. We are now about 300km from Sicily in a quiet sosta in the mountains. Resting after the mass of walking we have done this week. I hope everyone including my Dad enjoyed the pictures of Ercolano and Pompeii.