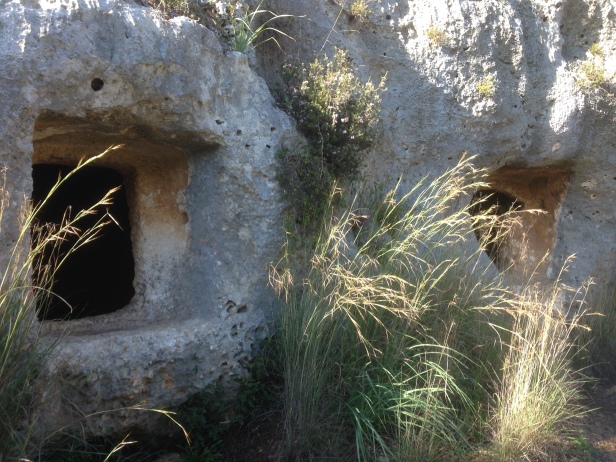 Day three of our hire car and we now have a newer car. A bigger, automatic car, but unfortunately a bit of a gas guzzler. As we had done most of the big drives, we now were focusing on one place stops. Today we decided that it was The Necropolis Di Pantalica. Not far from the famous Syracuse. Listed as a UNESCO world heritage site its a collection of about 4000 tombs dating from the 7th-13th centuries BC. We headed off about 11am after sorting out the paperwork for the newer car. A lot easier to drive, we headed off back down the autostrada. Exiting off at Catania we found ourselves heading along other main roads and autostradas that were free. About 7 mins from the destination, again the sat nav deciding there was a better route. The road no wider than the car and rocks hugging the side of another goat track, we winded up and down these paths. They really weren’t roads. Even the road sign was an explanation mark. This probably should have been the point we looked for another route. It would have been ok in the first car, it was smaller. But this was crazy. Finally arriving at the parking for the necropolis. Stressed and cursing. We got out to make sure we hadn’t added any dents or scratches after the hair-raising detour. The Necropolis settled high up in a beautiful national park setting. We asked a guy sitting in his car, if it was open. He said yes and in Italian, that no dogs are allowed. He then went onto say, if he covered his eyes, he didn’t see anything. The marvels of hand signals in Italy. We headed in and along the limestone cliffs, walking down staircases, carved or eroded over time. The river Anapo flowing down the bottom. As you go further in, you can look across and all through the cliff face and hillside you see the tombs. Square cut boxes, with windows or doorways opening out over the river below. These are high up, many hundreds of metres. Its eerie and amazing all rolled into one. You wonder how back in the day they reached these tombs, did they climb down some how or up? We headed down the path, passing many on our side of the river. Peering inside, some barely big enough to lie down in. Others like rooms. One had a limestone like bed. As we descended the staircase we arrived at the river bed, storms leaving a trail of debris. A beautiful green / blue pool of water collected not far from a few lower tombs. Looking up from the bottom, tombs all around up on the cliffs above. The day heating up we climbed back up. You can walk on the other side, but you need to drive 11km around to the other side. Especially with the river bed now blocked across. After our sat nav meltdown, we decided that we may return with the motor home in the new year. Apparently you can park on the other side. Leaving the area we decided to head through the nearby town of Sortino. We figured surely the sat nav would go on main roads back, and for once it did. Driving back we found our cheapest fuel stop in Italy so far €1.39 for diesel. On the motorway it was packed, people taking advantage of the cheap fuel. Pity its on the wrong side as we will pass it leaving in the motor home. That would be the place to go. One more day of car hire and we think we will head to Castelmola, its famous bar Turrisi and then drive to Lidl to stock up. Having not been to Lidl in 6 weeks, im having withdrawals. Christmas ( Natale ) is around the corner, another year nearly finished. The time has flown in Sicily and we havent even gone round the island yet. Vita amore e italia  (love life and Italy)…….