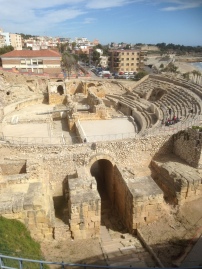 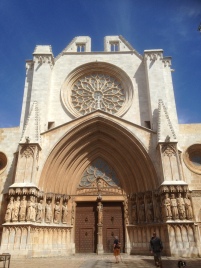 Parked up between two old spanish forts, we overlook the green & blue waters of the Med. To the right you can see at the base of the town the Roman amphitheatre next to the railway lines. The bay curves around and the port joins the end. Behind us is a park of pine trees. We weren’t going to come here as we only had co ordinates for one park, this one. So after talking to our new friends Henk & Netty from Belgium, we both decided to check it out. Henk & Netty are a fab couple, who Jas made friends with straight away, discussing cars and Wales. Henk loves steam trains and has rebuilt his own car that is 90 years old. After they arrived here yesterday, Henk invited Jason over for a glass of his Belgium beer. Four hours later and Netty & I polishing off 2 bottles of Mosel wine. It was time to retire for the night. This morning with a hangover that would have sunk ships, I sat drinking my coffee, watching the paddle boarders in the bay below. We all headed into Tarragona to visit the sights. Taking in the beautiful cathedral, roman amphitheatre, roman circus and all the city’s ancient walls. Fossils can still be seen in the stone and some of it dates back to the 1st century AD. All the streets are built into ruins or city walls and the plazas open out into areas of cafes with a monument or two. Stopping for coffee and with all the dogs chilling we wandered on. Henk & I taking photos, Netty and Jas walking with the dogs. With 30 years between us I think we will have a great friendship for many years to come. The weather here is supposed to be cold but its warm, sunny with a touch of wind. The views are spectacular and I am really glad we decided to stop here.