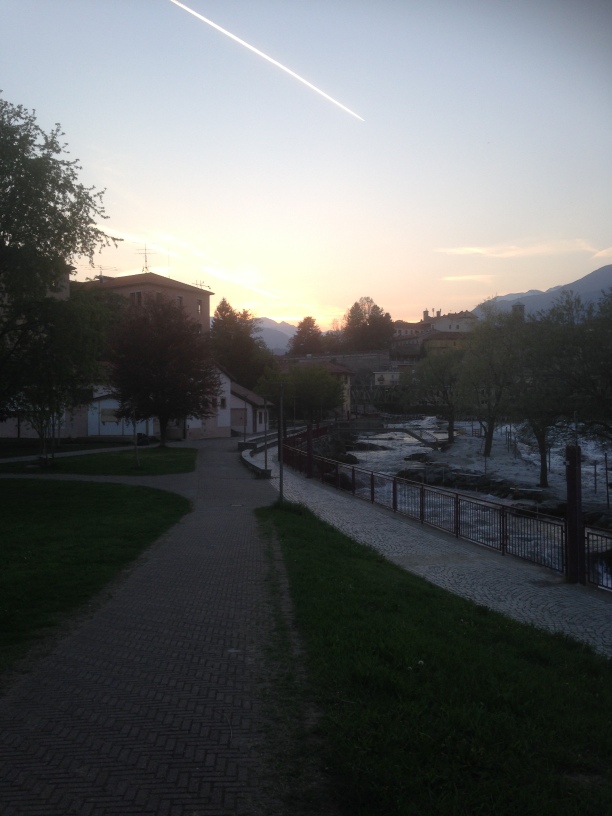 Here we sit parked up metres from Lago di Varese, not far from Lago Maggiore. The lake calm and flat, dotted with buoys that mark out the rowing lanes. Once an olympic venue its a great little stopover. Since coming into Italy you appreciate the vast amount of sport they do. At Cuneo we watching kids speed skating at night, football, triathlon, & cycling. At Cherasco we were parked up outside an archery club, watching the children with their modern bows and some of the adults with almost old fashioned wooden bows & arrows. In Ivrea we were parked just by the Duoro and the Olympic slalom kayak/canoe course. The power of the Duoro due to the recent snowfall and melting alps was powerful and fast. Now at Lago di Varese, a few rowers going out we passed the Australian Institute of Sport. Yes you heard that right, Jason said he did a double take to make sure it didn’t say Austrian. Speaking of Australians we made some great friends Peter and Lynnie, fellow HOG members who were parked up at Ivrea. A great couple like-minded in their travels, heading to southern Italy. Yesterday we decided that it was time to get rid of some stuff. We reckon at least 50kg of stuff we got rid of. It is amazing what you bring and never use. Half my wardrobe I havent worn so im sure more of that will be going out before the end of the trip. So far in Italy the road signage is great, so much clearer than any country we have driven in yet. The drivers usually have a death wish and overtake at every opportunity. The also don’t like to stop at zebra crossings as Peter and I found out yesterday. A guy flew past and didn’t stop even though we were already on the crossing. The roads are so so, potholes yes but probably the same as the UK. Fuel is the killer at the cheapest for diesel €1.36 litre and most expensive we have seen €1.62 litre. I would much rather spend that on Gelato, coffee, wine and food.

Gelato is becoming a staple, as its been so hot. The poor dogs, ive resorted to putting their cooling mats in the freezer to cool them down. The communication and my Italian is getting pretty good here. Even in the laundry yesterday I managed to have two conversations with two ladies who both spoke a little English. One lady telling me they had a huge snowfall 10 days ago, that is not normal, then followed by extreme heat 25-27 degrees which is also unusual for this time of year. Most little towns don’t speak English, but usually we are just ordering coffee or Gelato, so manage to get by. The scenery driving is lush, green fields, then sold gold/yellow flowers alongside mountains and lakes. Northern Italy is beautiful. Today we drove past a stunning castle perched on the side of a lake at Besozzo I think. The only sad thing was no picture as we were unable to pull over.