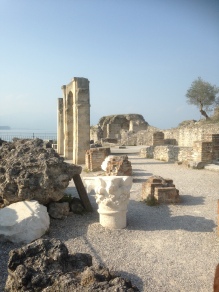 We can totally see why people rave about the Italian lakes. They are breathtakingly beautiful. The calmness and clarity of the water ranging from green to blue. We arrived in Sirmione on Lake Garda this morning after two days parked at Lake Lecco. Paying the toll of €5.30 to get here was a bargain for 75km of the drive. The days spent at Lecco were fab. The calmness of the water with the backdrop of the mountain and lakeside towns. The day we arrived it was us and a dutch camper. The local police arrived in the evening, warning the dutch couple they could stay just not up on their chocks, as that’s camping behaviour. The police officer was really nice even telling us that the next day a big football tournament was on and that if we wanted to leave we had to do so before 8am. Otherwise we would be blocked in. True to his word at 9am it was like a tetris puzzle, cars blocking everyone in. We soon realised it was a public holiday as well, Liberation day and everyone descended on the lake for sunbathing, swimming, kayaking and boating. The police arrived back in the afternoon to get people to move cars, as someone must have called them as they were blocked in. The drive the day before from Como to Lecco summed up Italian driving. They park everywhere even if it’s into a road lane. As Jason found out trapped in a lane, people tooting and cursing us as we couldn’t get round the car, and no one would let us get in the other lane. They pull out no matter who is coming and at whatever speed, thinking everyone’s a small car, yup not us. Today we are at Lake Garda parked up at Sirmione, out on the peninsula. A steep night at €21 but its a 5 min walk to the historic centre, 13th century castle ( Rocca Sealigera Sirmione) and lake Garda. Later today as the crowds disperse we are going to go to the Grottos Catullus (roman ruins). It is so busy here with bus loads of tourists. Waterways filled with boat tours and gelato shops on nearly every corner. Fruit salad and fresh lemonade, we stopped for ice coffee as the day heats up again. Tomorrow we are off to Verona and then Venice. We are forever changing our plans, the great thing about motorhoming. Slovenia and the top of Croatia here we come. 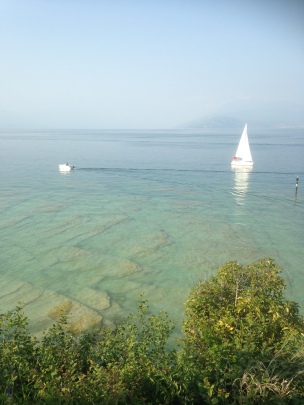