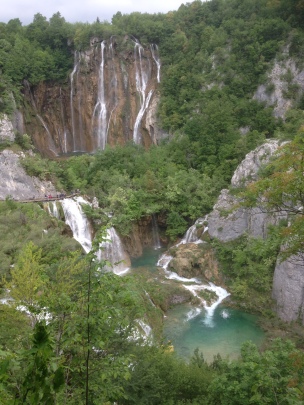 Yesterday we drove the very scenic route from Krk to about 20 km from The Plitvice lakes. The drive along the coast was stunning, with many an opportunity to stop and take photos. We drove through Senj a beautiful coastal town with a castle up on the hill, and started the ascent up the mountains. The winding roads called Serpitine, appropriately named for hairpins. The drive up was a trek, but with not much traffic we took our time. The other side of the mountain led to a plateau of such lush green valleys. Driving through villages you are suddenly stuck by the sight of some of the buildings. Desomated buildings with roofs imploded in and many a house with what we think look like bullet holes all on the outside. Some patched but many still bare the scars of the Croatian / Bosnian war. You forget that this was a war zone 25 years ago and was Yugoslavia. So close to the Bosnian border, you feel for these little villages destroyed many years ago. We rounded a corner in the forestry to see an ambulance down a side road and the signs with the skull and crossbones in red.  A group of guys having a lunch break, we think they were clearing for landmines. You suddenly remember where you are, these are the back roads that the tolls miss out. A bit of history you could drive past and miss. Honey and cheese stalls line the road side, ive never seen so many types of honey, black, golden and yellow all in clear jars, stacked up. We arrive at our stop for the night, a chinese restaurant. Free but we ate for a treat, the plan to get up early with our friends Peter and Lynne parked next to us. We wanted to get to the Plitvice early to do one of the bigger routes. Well…. the church next doors, its bells rang every hour on the hour all night. With a minute long chorus at 8pm and 6am. In this town no one would have an excuse for getting up late. We arrived at the Plitvice lakes at 7am and entered at 8am to catch the shuttle to the upper lakes. It was beautiful and quiet and we descended down in just under two hours. The boat ride to the lower lakes was calm and busier. The lower lakes, obviously busier for those wanting a quick look. It was prettier and more turquoise than the upper lakes. Still it ticked the boxes in the bucket list and we are glad we went. We are now parked up at Slunj overlooking the town and river. Tomorrow a walk to town to check it out before heading in the direction of Zagreb