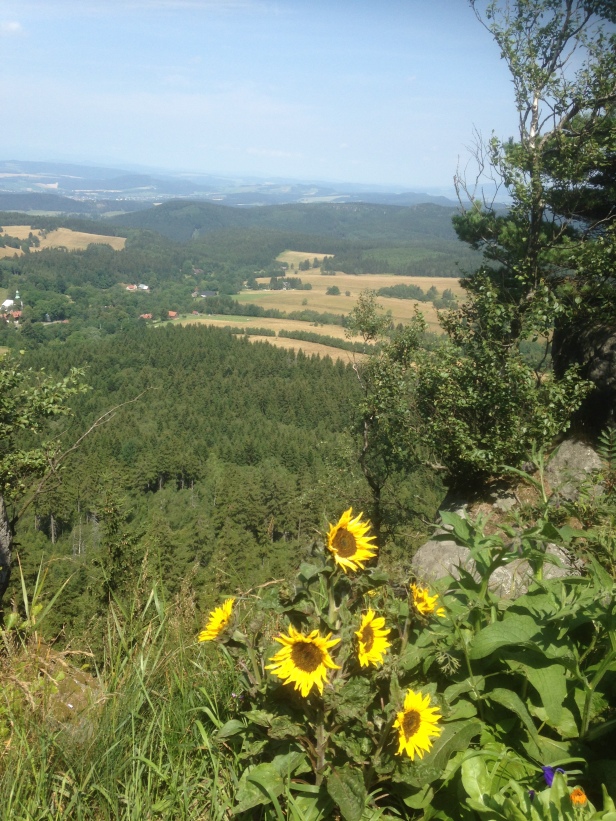 It’s a stunning view right outside the motor home. Overlooking Velka Jesenice, a blue-green lake in Czech Republic. We arrived here this morning early, it was only 30 mins from our stop last night in Poland. Yesterday we decided to visit the Stolowe Mountains National Park. As we pulled up, you see the rock formations on top of the mountain. Parked up for 20 zloty (€5 approx) we headed up the 600 + steps to the first viewing platforms. Showing stunning views over the valley below. There is a pub and cafes at this point and you can then pay 10 zloty each onto the next part. As it was all written in Polish we just decided to do it, not really knowing what we had paid for. We started following a group of older Polish hikers all on the piss. How did we know this, one they had bottles and cans coming out of their pockets, two when it started to get hot, it was steaming out of their pores. All of a sudden we are in the Szczeliniec Wielki (labyrinth). Winding between the rock faces, we were in hysterics with the pissed Polish as it narrowed so much we had to take backpacks off to squeeze through, and at one point were on hands and knees crawling through. Add to this two dogs and it was an adventure, but so worth it. We must be getting fitter as this seemed easy for both of us after our mammoth hike in Slovakia’s Tatras, just a month before. After a rest and refuel we headed to the Chapel of Bones Kudowa Zdroj and a free car park for the night. Well worth a visit, a group is ushered into the small chapel, almost touching the walls with the size of the group. A polish nun, explains the chapel and where the bones came from in Polish. At the end I asked if she speaks english, to which she gives me a sheet with the history. Dating back to the thirty years war 1618-1648, bones were collected from the sick and placed in the chapel, it is full of skulls and thigh bones. Floor to ceiling. At the end of the speech the nun, lifts the floorboards to show you that more are under the floor. Unfortunately you can’t take photos, which I guess is also a sign of respect for the dead. I’ve also put in a photo my favourite Polish road sign. 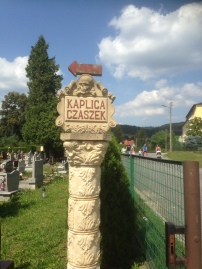 Today as we crossed the border, entering our 10th country in 9 months. The first day in a new country is always the most stressful, trying to find everything and then sort out the currency. So today after getting a vignette and changing some Kc (Koruna) we are chilling at the lakeside aire. The dogs have been for a swim. I’ve done yoga and read my book in the sun. Whilst Jason downloads stuff to watch offline. Tomorrow we are off towards Brno in the east of the Czech Republic.

3 thoughts on “Stolowe Mountains, a chapel of bones and the Czech Republic”